I’d love to meet with you soon during one of my new virtual culinary talks! 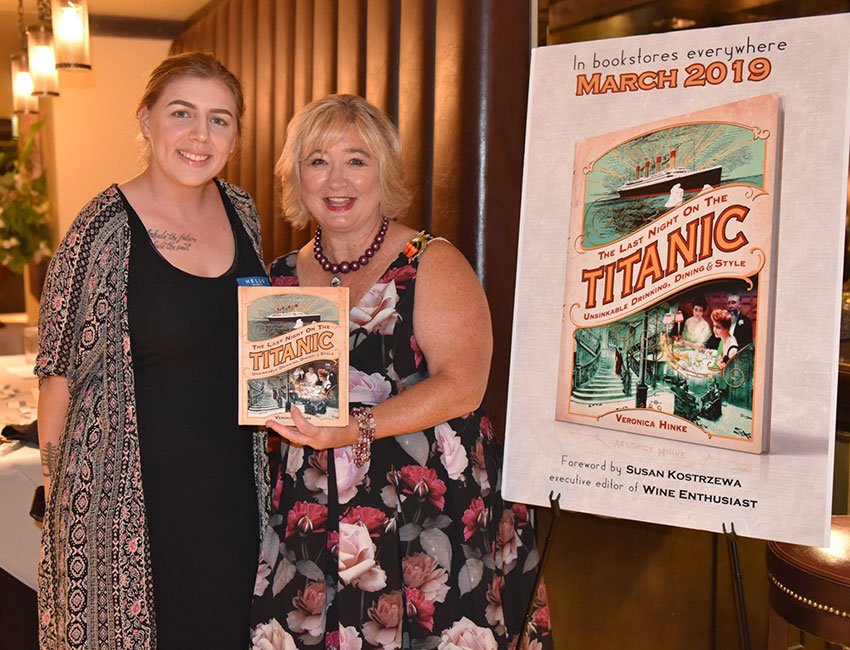 I love meeting new people and sharing my passion for food history, culinary narratives and deeper discussions around my book, “The Last Night on the Titanic“.  My speaker events and book sigings are a great fit for:

Let’s brainstorm how we can create a FABULOUS event for you! 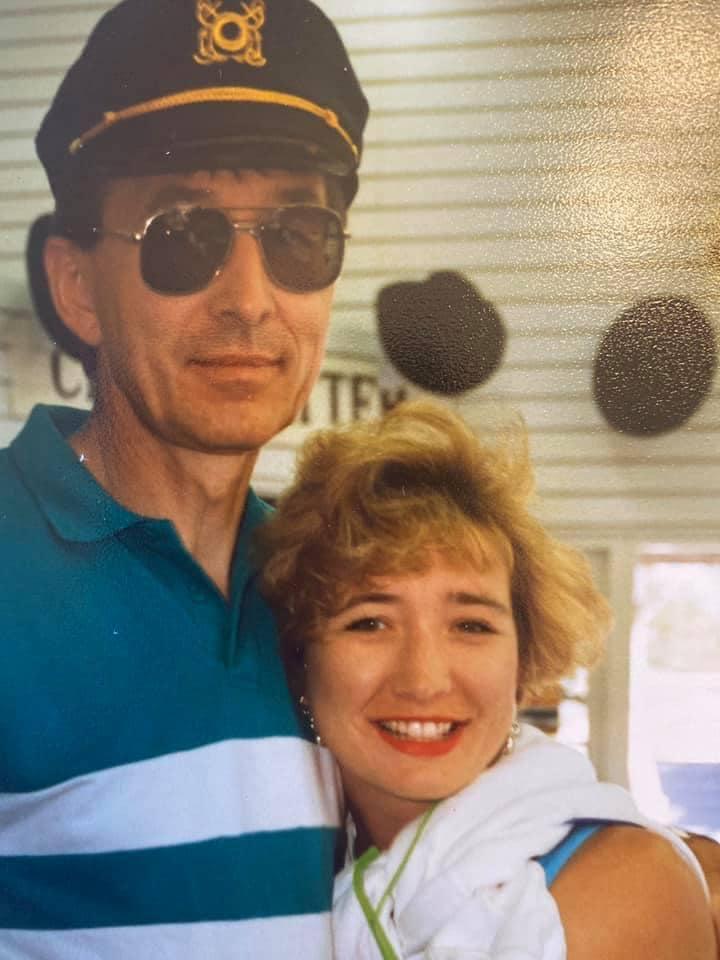 “26 miles across the sea…Santa Catalina is a-waitin’ for me!” I still remember us singing that song! In June 1991, I tried to take my mom & dad to Hawaii from Central Wisconsin on my new flight passes. We got bumped, but ended up having the time of our lives on Catalina Island– shopping for nautical hats & so much more. Those beautiful memories help me feel closer to my mom & dad now. It’s so important to make memories. You can imagine how excited I am to be live streaming with the wonderful people at the Catalina Island 🌴 Museum on their Instagram page this Friday at 1:30 p.m. Central Time! Catalina Island Museum is a non-profit dedicated to collecting, preserving, and promoting the culture and history of Santa Catalina Island. We will talk about their upcoming exhibition, “Titanic: Real Artifacts, Real People, Real Stories.” They will be unveiling their exhibition on Saturday, October 17, from 8 to 9 p.m. Central Time during their virtual museum benefit. During the live stream, we’ll talk about the meals and drinks that were served aboard the Titanic, and I’ll talk about forgotten cocktails that got lost during prohibition that would be perfect to sip during the event on October 17. If you have time on Friday to participate, it would be so fun for you to “be” there! The live stream will be on the museum’s Instagram: @catalinamuseum. 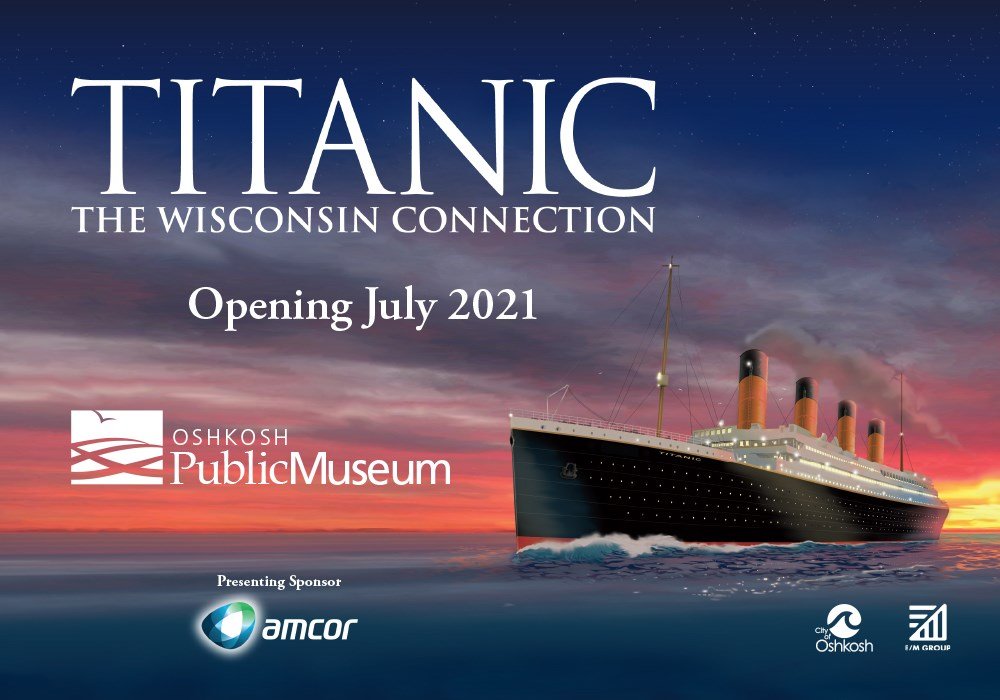 A short reading and presentation on Wisconsin ties to the Titanic disaster. Revealing letters from Merrill, Wisconsin popcorn vendor Dan Coxon to journalist H.V. Kaltenborn & more. Inspiring stories of some of the heroes of one of the worst maritime disasters ever.

Come and raise a glass with us and honor the incredible life of the “unsinkable Molly Brown!” We will discuss Margaret’s acts of bravery on the last night on the Titanic and beyond. We will also talk about other “Titanic Heroes” who inspire to this day, and are especially empowering during these uncertain times.  Make one of the Edwardian cocktails featured in my book, and come together for this lively discussion of history & heroes! 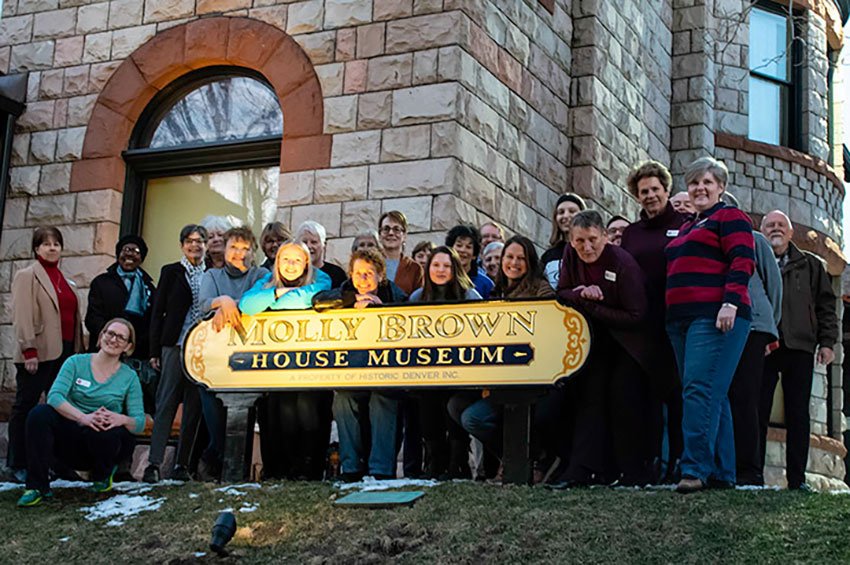 I am honored and delighted to be able to help kick-off an online celebration on the eve of Margaret (Molly) Brown’s 153rd. birthday! Margaret is one of my personal heroes, and I hope that you will find inspiration from her story, too. I will demonstrate how to make a Clover Club cocktail, which is a beautiful pink gin-based drink that was very stylish when the Titanic sailed. The Clover Club was invented in Philadelphia, and soon after was  popularized at the Waldorf=Astoria in New York City, which was owned by John Jacob Astor IV. Like Margaret, he was traveling aboard the Titanic in first class.

ONLINE for Museum Members
Become a museum member to participate.

I have been thinking a lot lately about a real Titanic hero who courageously helped others during the disaster. The Molly Brown House Museum contributed information, recipes and photos to my book, and I am very happy to be able to talk about Margaret Brown and other selfless passengers and crew during this Zoom event exclusively for museum members and volunteers. In my inspirational webinar I will feature ways Margaret Brown and other Titanic heroes helped others during the disaster. No night on the Titanic would be complete without the dishes and drinks that rivaled any found on land. When you register for this free webinar you will receive recipes for a cocktail and appetizer to enjoy while listening to rousing stories from the final night of the famous voyage.

“Titanic Heros: Learning about the inspiring people who chose actions of bravery over fear!”
April 23, 2020 (PAST EVENT)


In this Zoom webinar, you will hear about five inspiring passengers and crew of the Titanic and the things they did during the crisis. Many lessons can be learned from them today. 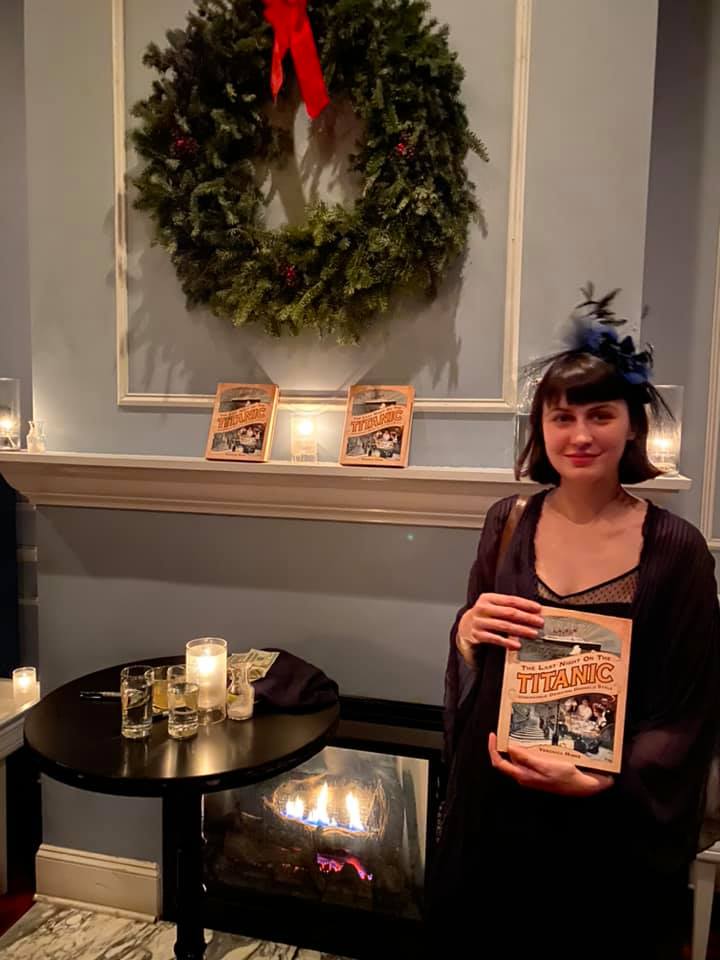 Find a respite from the holiday bustle behind the long and heavy velvet draperies of The Violet Hour. Nestle in for the evening at this fantastic pre-prohibition James Beard Award-winning bar. Sip Edwardian cocktails and visit with me and a man who sparked my interest in Titanic-era drinking and dining: James Beard Award-nominated mixologist Toby Maloney. Toby and I worked on the Wine Enthusiast article that caught the attention of a book publisher and shaped the framework for The Last Night on The Titanic: Unsinkable Drinking, Dining & Style. Toby and I will share our favorite ideas for how to enliven your bar and throw your holiday parties in Downton Abbey-style! Personalized books will be available for purchase. 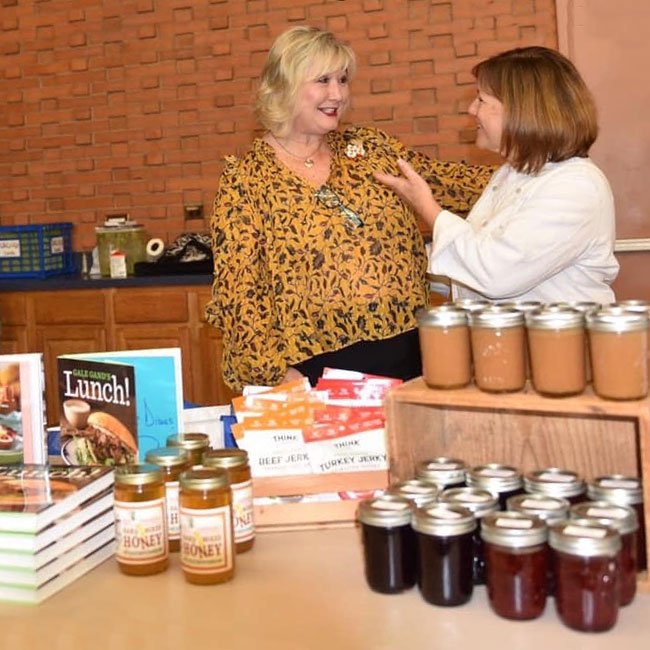 Acclaimed pastry chef Gale Gand contributed recipes for delectable Eclairs with Chocolate Ganache and lovely Apple Meringue in “The Last Night on The Titanic: Unsinkable Drinking, Dining &amp; Style” (Regnery History, 2019). Gale will be part of a celebration of fall foods from menus from the Titanic on Saturday October 19 at 10 a.m. as the Culinary Historians of Chicago study fall foods from menus from the Titanic. Gale will talk about the simplicity, seasonality and elegance of Apple Meringue, chocolate ganache and other Edwardian delights that were aboard the Titanic. Get inspired to entertain in “Downton Abbey” style! Bethany Retirement Community, CHICAGO. 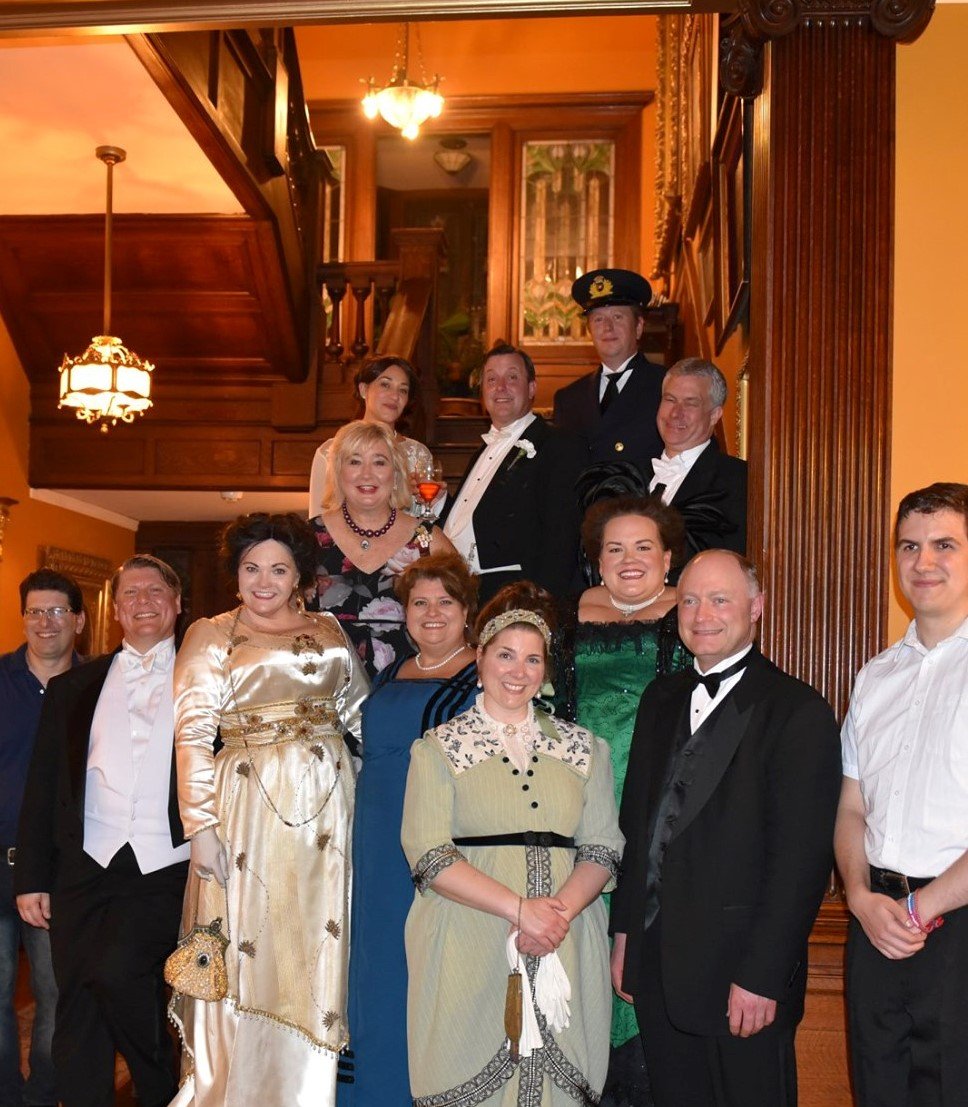 Mingle in the storied home of A.L. Ringling (yes, one of the “Ringling Bros.”) with actors in costume who portray real Titanic crew members and passengers! Sip cocktails and hear about the people who inspire us to this day in how they faced unthinkable tragedy. Titanic canapes and other refreshments will be served. 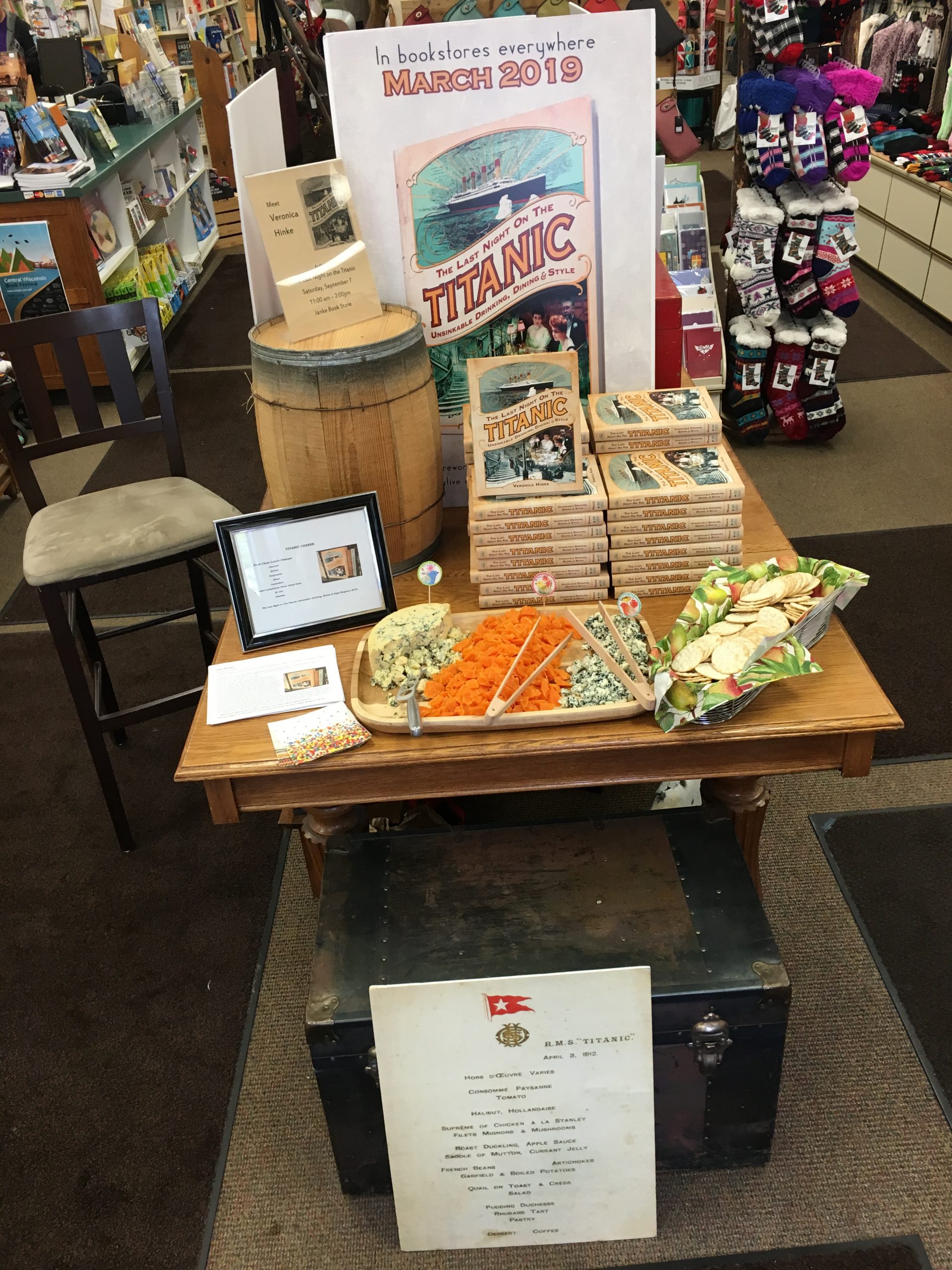 I am so happy to be participating in Wausau’s long-running & beloved festival “Artrageous Weekend” in Wisconsin’s oldest bookstore- Janke Bookstore, which is celebrating 100 years. Stop in and say hello on your stroll through the fabulous artist tents! We will sample some of the cheeses that were on the lunch menu every day in First Class on the Titanic. 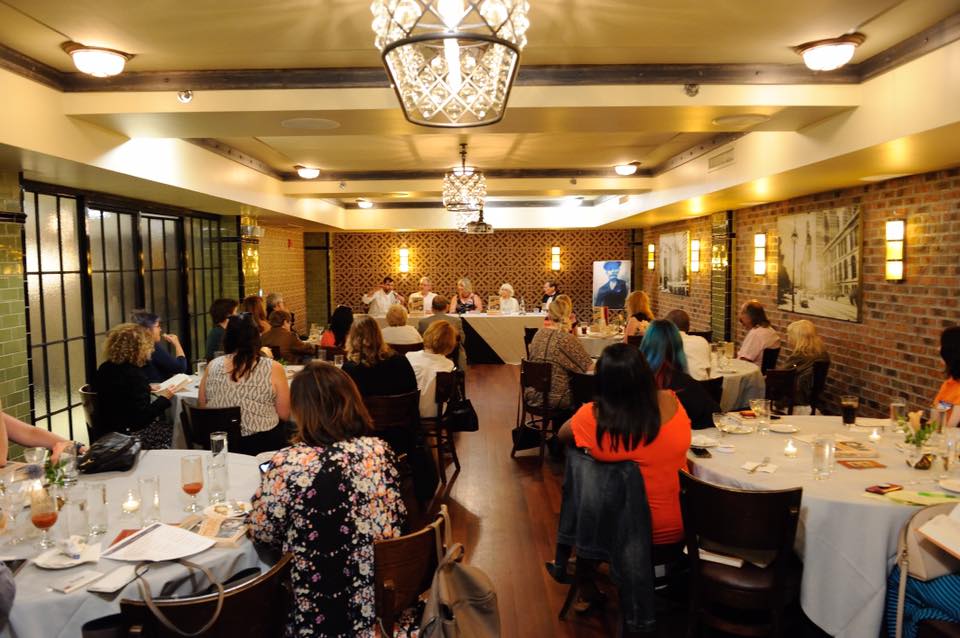 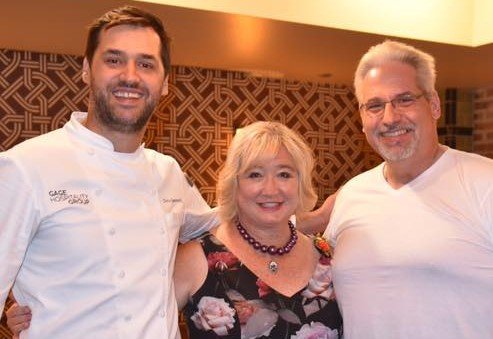 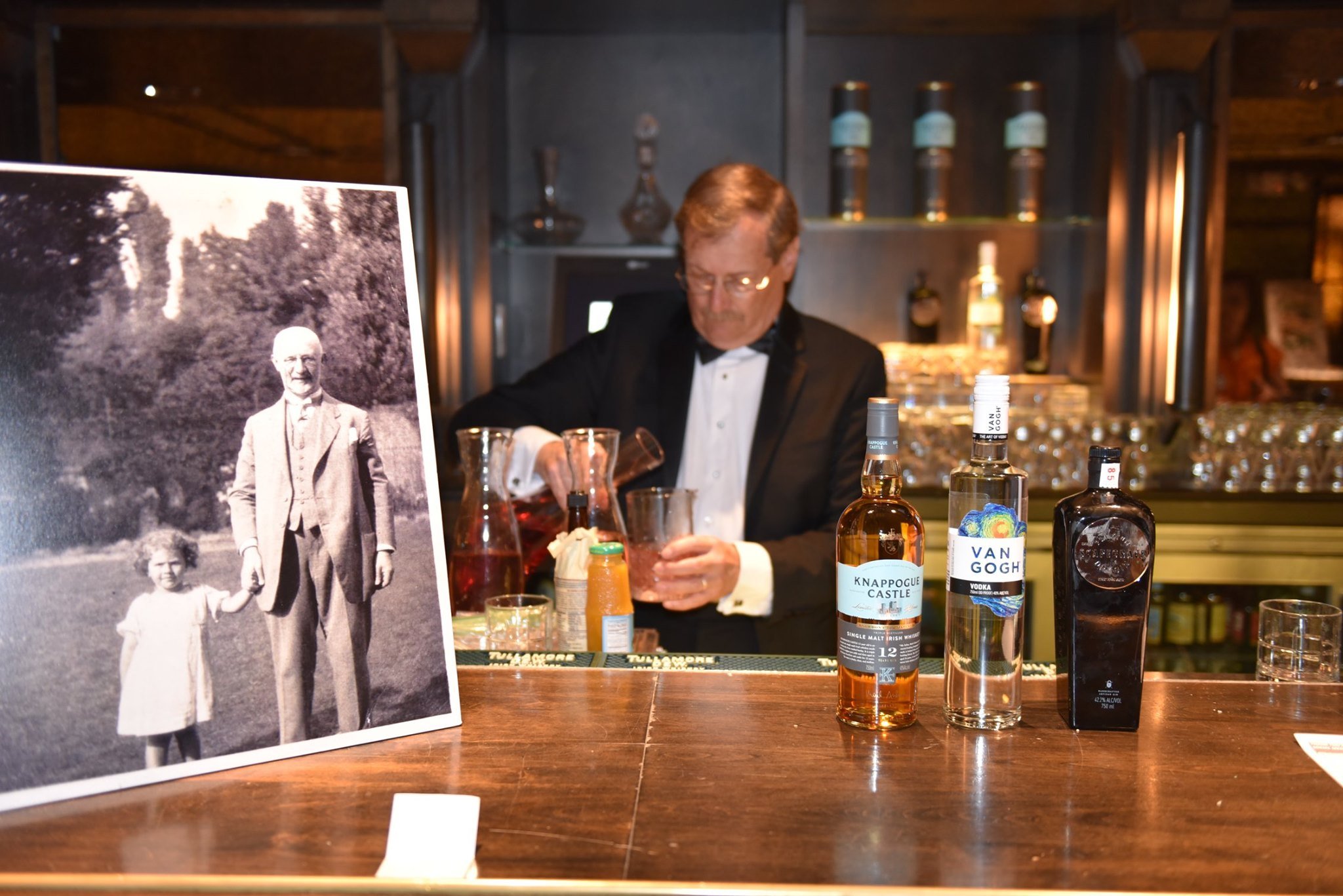 Drift back in time in a special space where many of the phenomenal Edwardian hats that were worn aboard the Titanic were likely made- in the former Gage Millinery, which is not a sumptuous restaurant with modern first class cuisine.

SIGNATURE COCKTAILS: Jeffrey Pogash, representing The Cocktail Guru, Inc. will prepare two drinks that were  served on the Titanic and a third in tribute to John Jacob Astor IV, who created The St. Regis Hotel in New York City in 1904, home of the iconic Bloody Mary. Col. Astor perished on the Titanic, but he managed to save his pregnant wife by placing her in a lifeboat. On August 14, 1912, she gave birth to John Jacob Astor VI, known as ” Jakey”, who lived to be 79 years old.

The MARGUERITE Cocktail was the first DRY Martini, made with white French dry vermouth, rather than the traditional sweet red Italian vermouth that was more prominent at the time. We are using the deliciously complex, juniper forward SCAPEGRACE Gin from Rogue Society Distilling Co. in New Zealand, winner of the ‘Best Gin i The World’ at the 2018 International Spirits Competition in London, placing FIRST in a field of 600 gins.

ROMAN PUNCH was served as a palate cleanser at most High Society grand dinners in the19th century. The exceptionally smooth, Triple Distilled KNAPPOGUE CASTLE Irish whiskey is the perfect spirit for this interlude, a fine tribute to RMS Titanic, as the ship was built in Belfast.

BLOODY MARY was perfected at King Cole Bar in The St. Regis Hotel in the 1930′ s by Fernand Petiot who was trained at Harry’s Bar in Paris. This is the drink that helped establish vodka as a “reputable” spirit, sealing its popularity and propelling it into the annals of cocktail history. VAN GOGH Vodka from Holland is very smooth blending perfectly to provide a flavorful “kick” to this classic. 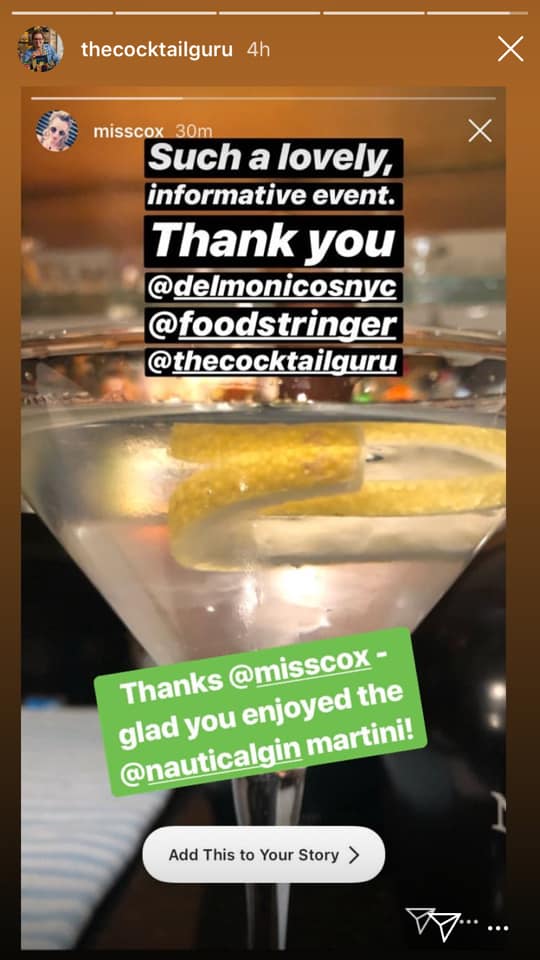 The luxurious dining aboard the Titanic was like no other ship of its day. Transport your senses to the first-class dining saloon by sampling a few of the hors d’oeuvres and drinks served over a century ago. A trend-setter during the Titanic-era, the historic Delmonico’s Restaurant will be serving up samplings of authentic dishes that will bring the lost world of Edwardian sophistication back to life.

Drift back in time and delve into the history of NYC’s and Delmonico’s incredible ties to this iconic ship as Titanic historian and expert food writer Veronica Hinke shares little-known and inspiring stories about the people, places, and dining connecting the Big Apple to the “Unsinkable Ship.” She will weave true, firsthand stories from passengers between examples of unprecedented luxury that will touch your heart and delight your senses.

Delmonico’s is a feature of The Last Night on the Titanic: Unsinkable Drinking, Dining, & Style. At the time the Titanic sailed, its innovative style was setting major social trends that would shape the future for decades to come. 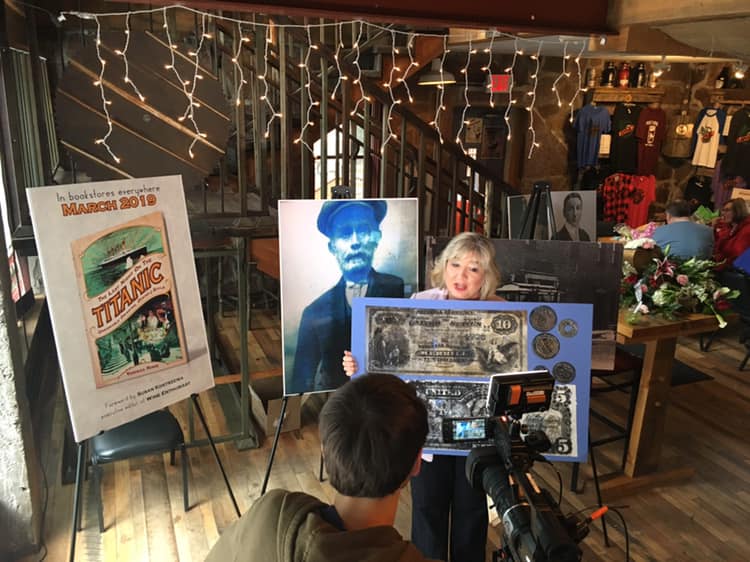 Something from Merrill was found at the Titanic wreck site, what was it? What kind of beer were they drinking on the Titanic? Who was Popcorn Dan? What was he doing aboard the Titanic? Who was he going to see when the ship docked in Brooklyn, NY? Find all this out and more on Sunday at the Sawmill Brewing Company (1110 E. 10th Street, Merrill) beginning at 2 p.m. Step back in time over 100 years ago, to learn about Dan “Popcorn Dan” Coxon, It was Sunday night, April 14, 1912, one man was on his way home to Merrill aboard the world’s most incredible & ill-fated ship ever.

Books will be available for purchase thanks to Janke Bookstore– Wisconsin’s oldest bookstore! 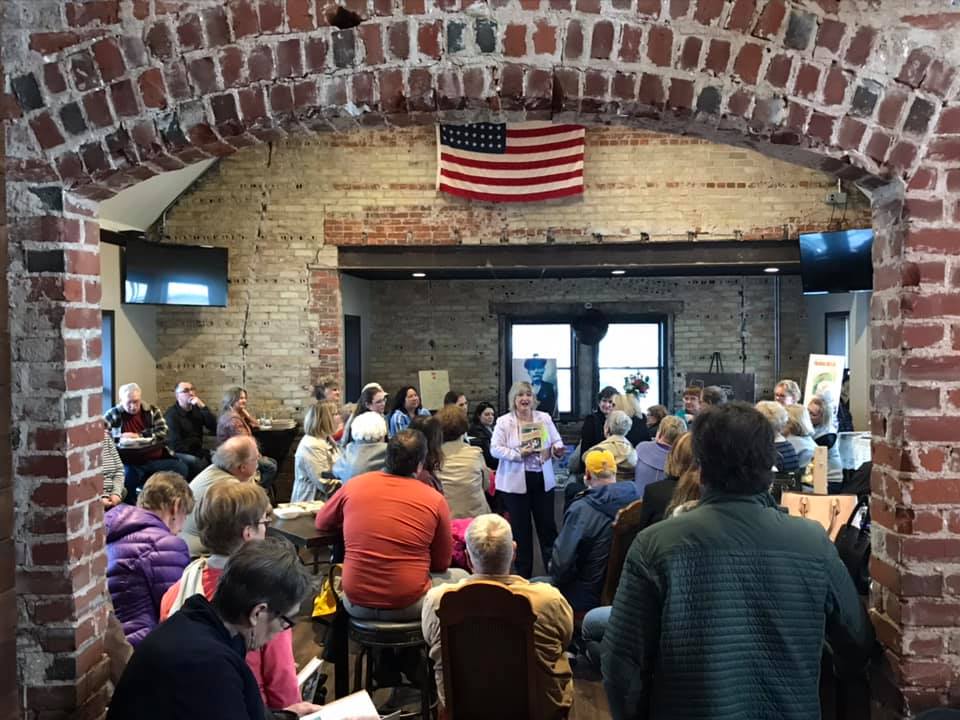 “Popcorn Dan” (Dan Coxon) would have passed through this historic train depot on his way from Merrill to England- the trip that ended with his voyage aboard the Titanic. This presentation will feature Central Wisconsin ties to the world’s most luminous – & ill-fated ship. Launch of the book The Last Night on The Titanic: Unsinkable Drinking, Dining, & Style. Titanic-era refreshments. Author Presentation and Q&A. Champagne Punch and Clover Club and other Edwardian cocktails! Asparagus bites, spring pea soup, chocolate eclairs and other Titanic menu items.

Books will be available for purchase thanks to Janke Bookstore– Wisconsin’s oldest bookstore!